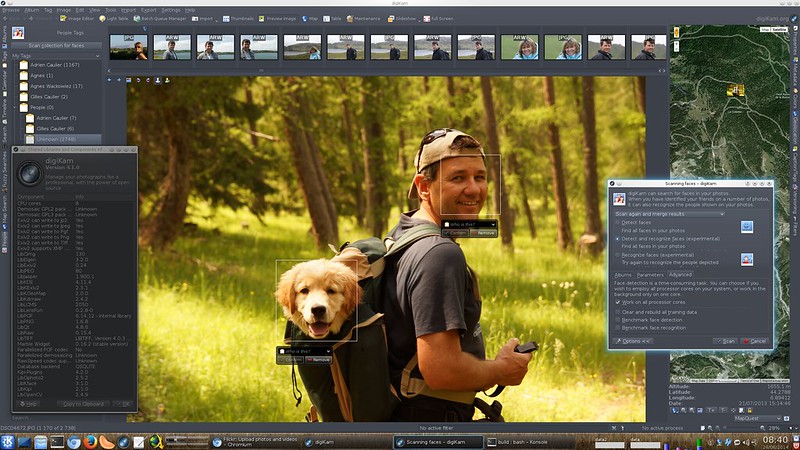 The digiKam Team is proud to announce the release of digiKam Software Collection 4.1.0. This release includes many fixes since the previous stable release 4.0.0:

As usual, we have worked hard to close your reported issues. A list of the issues closed in digiKam 4.1.0 is available through the KDE Bugtracking System.

The digiKam software collection tarball can be downloaded from KDE repository

But seriously, perhaps in a couple of more releases ...

As always, the best photographic app around!

However, please make it easier for the idiot to compile to older distro releases. I don't want to upgrade my entire distro just because it's missing Digikam 4.1.

So it seems it can't be built at the moment unless you also build the new opencv.

So if someone actually uses my ppa, you will have to wait for the 4.1 until either Ubuntu catches up to opencv 2.4.9, or I manage to prepare my build of it, which may take a while...

I don't think ubuntu 14.04 will get any official backport of newer opencv so I guess you'll need to backport that too for digikam 4.1 to build. That's what I did with my own packages of opencv 2.4.9 and digikam 4.1 anyway.

Are you publishing your

Are you publishing your packages? I didn't see them in your ppa.

Haven't done updates of digikam on my ppa since the kubuntu team started doing updates (for a while). Didn't want conflicting packages out there to that effort. I have built my own packages of digikam all the time for my self anyway.

Any chance of publishing a

Whilst I'm still plodding along and trying to understand the instructions, when/if I do manage to compile it, I'll attempt a how-to myself. Thought this may take sometime..... :-)

Wow! What a journey compiling

Wow! What a journey compiling from source is. Six hours of solid surfing, reading and trial and error.

Managed to compile libraw-0.16.0 and create a .deb that installs and is recognised, so now have run into opencv issue as above.Compiler cannot find my installed version.

Now, to tackle compiling that one too..... Here goes!

Digikam is really let down by

Digikam is really let down by the fact that it doesn't supply new builds (and all dependences) in a PPA for ubuntu users. Get with the times people, provide easy to install software and people will be more likely to use it. Sure, I could use the ubuntu PPA and run a much older version (with all the inherent bugs). Or I could spend some time working out how to compile the thing myself (I'm a busy guy and really, in this day and age why should I?). Or you could provide a PPA or at least a DEB package file to install the latest version. Not that difficult I wouldn't have thought?

Digikam is great - with a suitable ppa for ubuntu 14.04 better

I like digikam very much and use it intensively. As a volunteer I support a club collecting photos and preparing them for use.
Digikam is a great help because in total I work with some 90'000 files. But there is a number of annoying bugs in digikam 4.0.
So please motivate someone of your great team to prepare a suitable ppa so that I can use digikam 4.1 with ubuntu / Kubuntu 14.04. And enjoy your work to reduce the bugs - please!
Thanks to the team anyway!

I just uploaded my packages

I just uploaded my packages of both digikam 4.1.0 and opencv 2.4.9 to my PPA for (k)ubuntu 14.04 (trusty). They are waiting for being built but hopefully will be avalible as packages in a couple of hours...

That sounds great Philip, although I still can't understand why there isn't an official PPA........

It looks than the opencv changes were a little too big relative to my packaging skills.
I copied to built packages to my ppa as well, so if someone is using it already they should get it without changing the ppa.

Hi Philipp, I asked Gilles if there is a possibility to provide a ppa for ubuntu 14.04. You did something like that in the past for earlier versions. I'm lacking the knowledge to create a ppa, but I'm a great fan of digikam, I use digikam daily to work with my photo collection. Could you please do the the whole fan group the favour to create such a ppa?

Or, without the KDE dependencies for gnome version of Ubuntu :

Before doing the installation, be sure to uninstall the previous version of Digikam and Kipi-plugins.

Happy that it worked for you

If you're not running 14.04, what then? This is the point of the present discussion.

Thx Phillip, maybe that should be referenced in the install notes of this website.

My packages are not official

My packages are not official packages but something that works until they are avalible from downsteam maintaining packagers. If posted here on the digikam site they would be more or less official and I don't think upstream Digikam have any intention to be package maintainers. That should be handled in each linux distribution.

Is there a way to show all and only these faces that have been detected & recognized by digikam but not yet confirmed by the user?

It would be really helpful for people with large collection of faces of many different people. I couldn't find an easy way to check if dikigam 4.0.0 recognized (i.e. connected a face with a person, not detected a face) faces correctly.

this is definitely something I needed to correct those wrongly recognised faces and approve the correct ones - for now, I have been hovering over all images to identify the unconfirmed ones but this is not really practical for larger collections

Would it be This right?

I really need this "unconfrmed faces"

Has support for Windows been dropped? I haven't seen a new windows install package in many releases.

There is a beta version of

There is a beta version of Digikam 4.1.0 for Windows in the Mailinglist for Users of Digikam (http://mail.kde.org/pipermail/digikam-users/).

Thank you for your effort. (I

Thank you for your effort.
(I am not actually using it right now, but thank you all the same)
There seems to be one in http://download.kde.org/stable/digikam/ too.

I did notice that the version 4.1 installer is far smaller then 3.4 ( 170 MB vs 234 MB). I'm curious about why, is there a lot missing or have you been able to optimize the code? Or are you just using a higher compression for the distribution?
And I read that KDE 5 framework got launched today. What does that mean for Digikam on Windows, do you have to rewrite and retry everything? Or will it make work more easy to cross-compile?

Good luck and keep up to good work.

The difference is due to all

The difference is due to all translations files missing in this installer. digiKam still in English.
It miss msgfmt program for KDE windows

The 4.x builds for Windows

The 4.x builds for Windows appear to be missing Lensfun plugin, meaning no auto-correction for distortion/vignetting/CA.

Still (since 4.0.0) when you want to add a face tag, you're presented a combo list of what matches what you're typing, but you cannot click it because mouse click is ignored. You have to select the right tag with arrow keys and press Enter.

Both in album view and in face detection/recognition view.

Since installing 4.1.0 (debian package on sid) faces are not detected anymore on my pictures (I dont use recognition, just detection). Accuracy set to 100%.

More, when you select only ONE ALBUM in the "album" config option (I usually drop new photos in a "New pics" album), face detection will START from that album but will nevertheless continue on the whole rest of the albums in the collection.

Face Detection is typically an OpenCV issue with missing internal components not installed to your distro.

Run digiKam from the console with debug trace enabled and look messages printed when you run face detection.

All packege dependencies are met though...

These files are typically installed through libkface. Perhaps it's a packaging problem from your distro, as package in incomplete or badly compiled.

Without these files, detection cannot be processed.

Files are actually there

Files are actually there (/usr/share/opencv/haarcascades). libopencv* is 2.4.9 though, may it cause problems?

Okay, I managed to make it work. I needed to copy the xml files into the following directory:

Thanks for the support :-)

Great. Just a softlink at the

Great. Just a softlink at the dir and face detection works great again!

I have nothing to do with the

... but only from 4.1.0 release. It sound like you have not packaged digiKam 4.1.0 with the libkface provided into the tarball, and used the system based library which is an older version.

This is what debug gave out

This is what debug gave out for me:

I guess the problem is that the Cascades directory isnt found. It is at /usr/share/opencv/haarcascades though, and i downloaded all the XML files from the website you specified. Is there any workaround for this, like specifying the directory for OpenCV or something?

digiKam looks like a great program but way too complicated for me to install and run - I'm only an average user and I'm not stupid but this looks too intimidating for me, big shame.

Hi Bob
As any feature rich software, digikam is a big bunch of complex code that depends on, even more, complex codes. Put it to work starting from source files may be a little hard. Yet, it is usualy very easy to install by using the binary packages provided by most linux distributions.

I know this may come across as a bit petty, but I would be grateful if you could arrange for a team member who is more fluent in English to proofread and edit your release announcements. The announcements are difficult to read due to some errors.

I appreciate all of your hard work on digiKam. As I want to be constructive, I offer you a revision of the above release announcement and I hope that you find it helpful:

The digiKam Team is proud to announce the release of digiKam Software Collection 4.1.0. This release includes many fixes since the previous stable release 4.0.0:

As usual, we have worked hard to close your reported issues. A list of the issues closed in digiKam 4.1.0 is available through the KDE Bugtracking System.

The digiKam software collection tarball can be downloaded from the KDE repository.