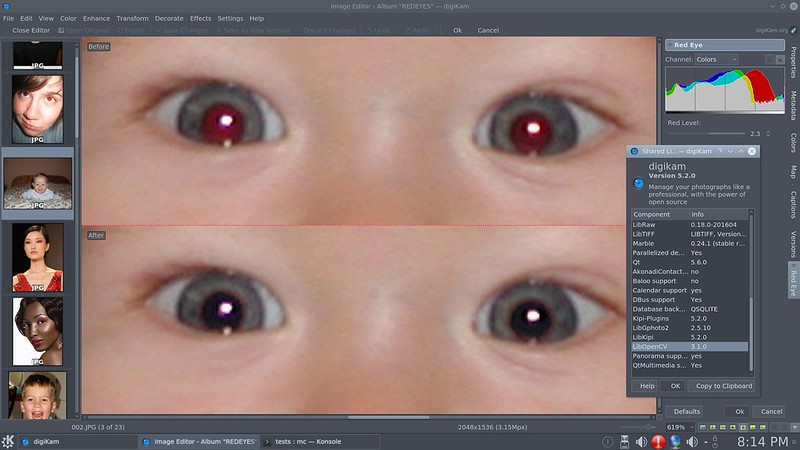 After a second release 5.1.0 published one month ago, the digiKam team is proud to announce the new release 5.2.0 of digiKam Software Collection. This version introduces a new bugs triage and some fixes following new feedback from end-users.

This release introduce also a new red eyes tool which automatize the red-eyes effect reduction process. Faces detection is processed on whole image and a new algorithm written by a Google Summer of Code 2016 student named Omar Amin is dedicated to recognize shapes and try to found eyes with direct flash reflection on retina.

This new tool is available in Image Editor and also in Batch Queue Manager to be able to process a set of photos at the same time. The algorithm have been very optimized for speed efficiency and for small memory fingerprint. End user can adjust just a single parameter about the reducing level of retina red color to the average of blue and green channels. The default threshold have been tested successfully with a trial and error basis from a large data-set of images. So typically, no user interaction are need with this new version of this tool compared to older one, where no red eyes detection was performed, and a lots of manual settings was required to process this kind of correction. 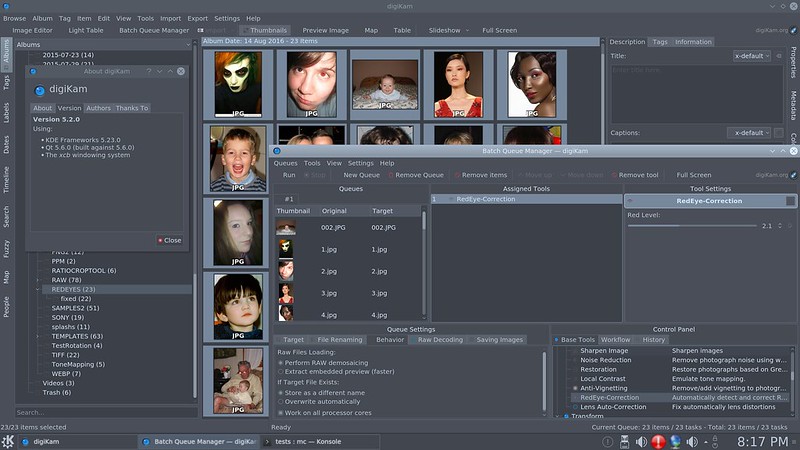 With the help of Wolfgang Scheffner, we also start to update the digiKam and Showfoto handbooks. Documents have not been updated since many years. We start to introduce description of 5.x features, but not all the documentation is yet done and re-writing still under progress. This take a while as documentation is huge. All help is welcome to contribute to this project, by writing sections, proof-reading, translating, etc...

For furher information, take a look into the list of more than 42 files currently closed in Bugzilla.

Wow!! This is great news. I'm super excited to try out the 5.2 release. And thanks to all working on updating the Digikam Documentation. Digikam is a big tool now, and having up-to-date documentation is critical to it.

Already installed on my archlinux machine. Great job as usual and devs have a very reactive support so Thank you !
Olivier

Hi all,
I just upgrade my Manjaro 16.04. I was looking forward to the new ported KIPI plugin for Gwenview. But I was disappointed that the option "autorotate using EXIF information" is still missing. I did not found any infos via WWW.
Do you know whats wrong?
Thanx!

Could you fix it please? If you need more information, please contact me with madarexxx at gmail.com .
Thank you for your awesome work - Digikam makes life of poor Russian student way easier :)

Thanks to the Digikam team!

Thanks for keeping up the good work! It is much appreciated to see this package under active development.

There are, however, some small glitches I found in 5.2 on Kubuntu 16.04:
- The style keeps reverting to 'Fusion'. I'm using the 'Breeze' style. Still, digikam used 'Fusion' on first start-up. When I open Systemsettings, change it to something else and then back to 'Breeze', digikam also changes to 'Breeze' ... only until the next time I start it; then it's back to 'Fusion' again.
- I'd like the tooltips for a thumbnail to include the title. When I set the corresponding tick mark in the digikam settings, it does show it. ... Only until the next time I start it; then it's untick'ed again.
- digikam forgets that it has been closed, prior to shutting down the computer. Next time I start my computer, it starts up as if I had left it running on the previous log-off.

These are just small issues. digikam + darkroom are really a great combo for managing photographs.

Where can I find an overview of planned features for the next version? I know there is a list where bugs and requests are listed, but they are not assigned to an upcoming version.

Will digikam, if it is not already implemented, launch a snap (ubuntu) package?

Great progress and good software. The updated handbook is one of the best news since there are so many functions and options.
Thanks to all devs.

Is there any chance you would add support for lossless editing of JPEGs? For example the red-eye removal tool: could you make it only recompress the parts of the JPG that have been altered (the eyes)? Today, it recompresses the entire image (like most image programs), right?

Since I hate losing anything unnecessarily and since JPEG is the most common image format on the planet, it would be awesome if more image programs would do like the "Better JPEG" program and take advantage of the fact that JPEG images are made up of lots of independently encoded rectangular blocks of pixels, and only blocks that have been altered need to be recompressed when saving the image.
( http://www.betterjpeg.com/features.htm )

Is this anything you've looked at / thought about?
I'm sure it involves making a special solution just for JPEGs (that have been partially edited, cropped, etc), but, of course, it wouldn't work when the user wants to resize the image or recompress it at a higher compression ratio, for example.

Using Mint 18 Cinnamon and Digikam 5.2 there is no function to print and no print assistent. Is there a plugin missing?

Digikam 5 need to be built

Digikam 5 need to be built with KF5 sane support and dependent relevant libraries to give you printing features. It's there in Digikam 5 "item" menu if the above is activated during build of Digikam

is there a way to install this on Kubuntu 16.10? I get an unresolvable dependency-error when trying to install Digikam again after the upgrade (which automatically removed it). The problem is this: "Depends: libmarblewidget-qt5-23 (>=4:15.12.0) but it is not installable".

Only for testing for the moment with a new account. It's not yet finalized and will be published officially with next 5.3.0 release...

Forget the question. The issue is solved. :)