Just in time to get you into the holiday spirit, we are now proud to release digiKam 7.0.0 final release today. This version is a result of a long development that started one year ago and in which we have introduced new features and plenty of fixes. Check out some of the highlights listed below and discover all the changes in detail.

For many years, digiKam has provided an important feature dedicated to detecting and recognizing faces in photos. The algorithms used in the background (not based on deep learning) were old and had been unchanged since the first revision that included this feature (digiKam 2.0.0). It had the problem of not being powerful enough to facilitate the faces-management workflow automatically.

Until now, the complex methodologies that analyzed image contents to isolate and tag people’s faces used the classical feature-based Cascade Classifier from the OpenCV library. This works, but does not provide a high level of positive results. Face detection is able to give 80% of good results, while analysis is not too bad but requires a lot of user feedback to confirm whether or not what it has detected is really a face. Also, according to user feedback from bugzilla, Face Recognition does not provides a good experience when it comes to an auto-tag mechanism for people.

During the summer of 2017 we mentored a student, Yingjie Liu, who worked on the integration of Neural Networks into the Face Management pipeline based on the Dlib library. The result was mostly demonstrative and very experimental, with poor computation speed results. We saw this as a technical proof of concept, but not usable in production. The approach to resolve the problem took a wrong turn and that is why the deep learning option in Face Management was never activated for users.

We tried again this year, and a complete rewrite of the code was successfully completed by a new student named Thanh Trung Dinh.

The goal of this project was to leave behind all the old ideas and port the detection and the recognition engines to more modern deep-learning approaches. The new code, based on recent Deep Neural Network features from the OpenCV library, uses neuronal networks with pre-learned data models dedicated to Face Management. No learning stage is required to perform face detection and recognition. We have saved coding time, run-time speed, and improved the success rate which reaches 97% of true positives. Another advantage is that it is able to detect non-human faces, such as those of dogs, as you can see in this screenshot. 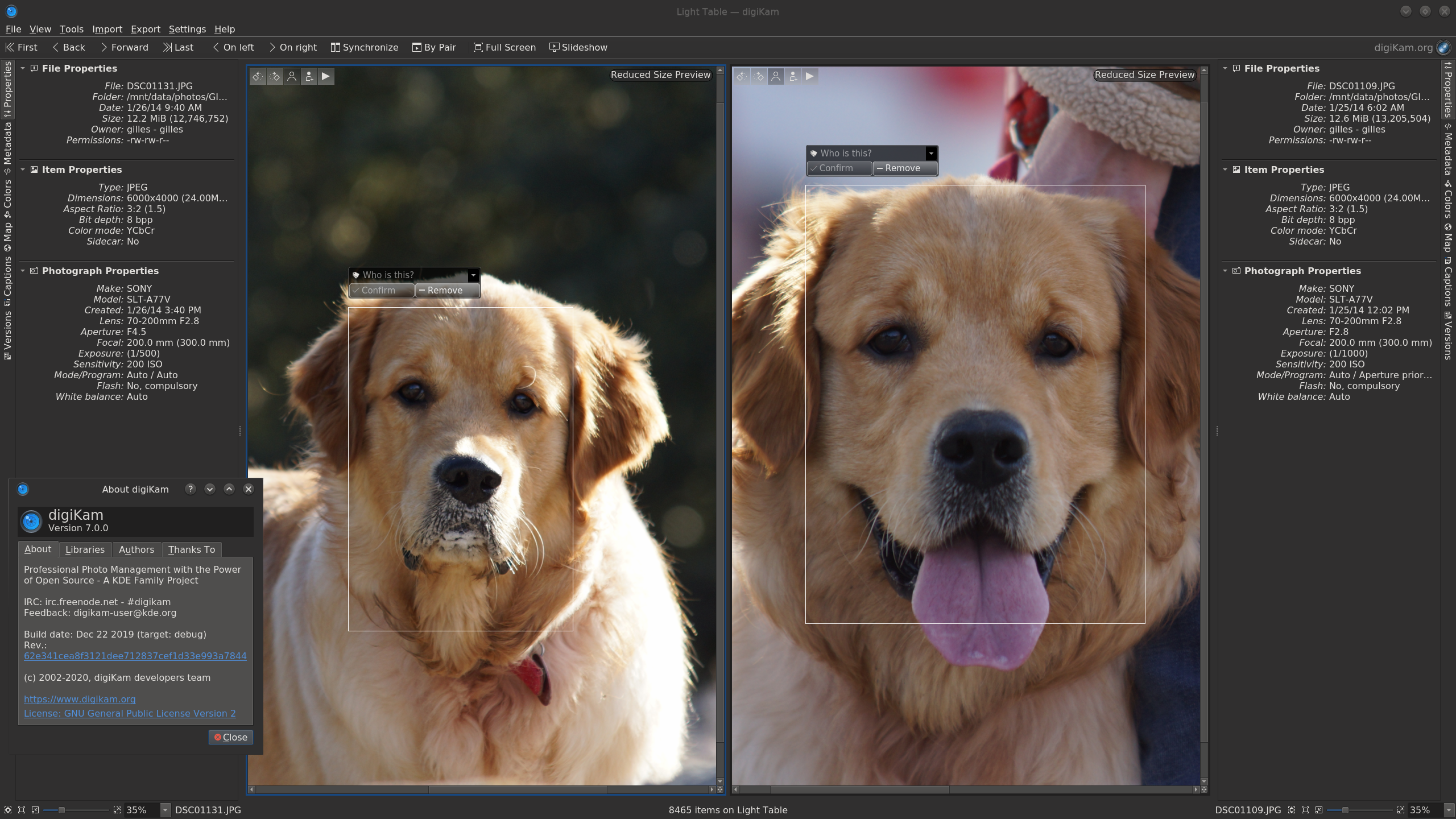 But there are more improvements to face detection. The neural network model that we use is really a good one as it can detect blurred faces, covered faces, profiles of faces, printed faces, faces turned away, partial faces, etc. The results processed over huge collections give excellent results with a low level of false positives. See examples below of face detection challenges performed by the neural network.

The recognition workflow is still the same as in previous versions but it includes quite a few improvements. You need to teach the neural network with some faces so that it automatically recognizes them in a collection. The user must tag some images with the same person and run the recognition process. The neural network will parse the faces already detected as unknown and compare them to ones already tagged. If new items are recognized, the automatic workflow will highlight new faces with a green border around a thumbnail and will report how many new items are registered in the face-tag. See the screenshot below taken while running the face recognition process. 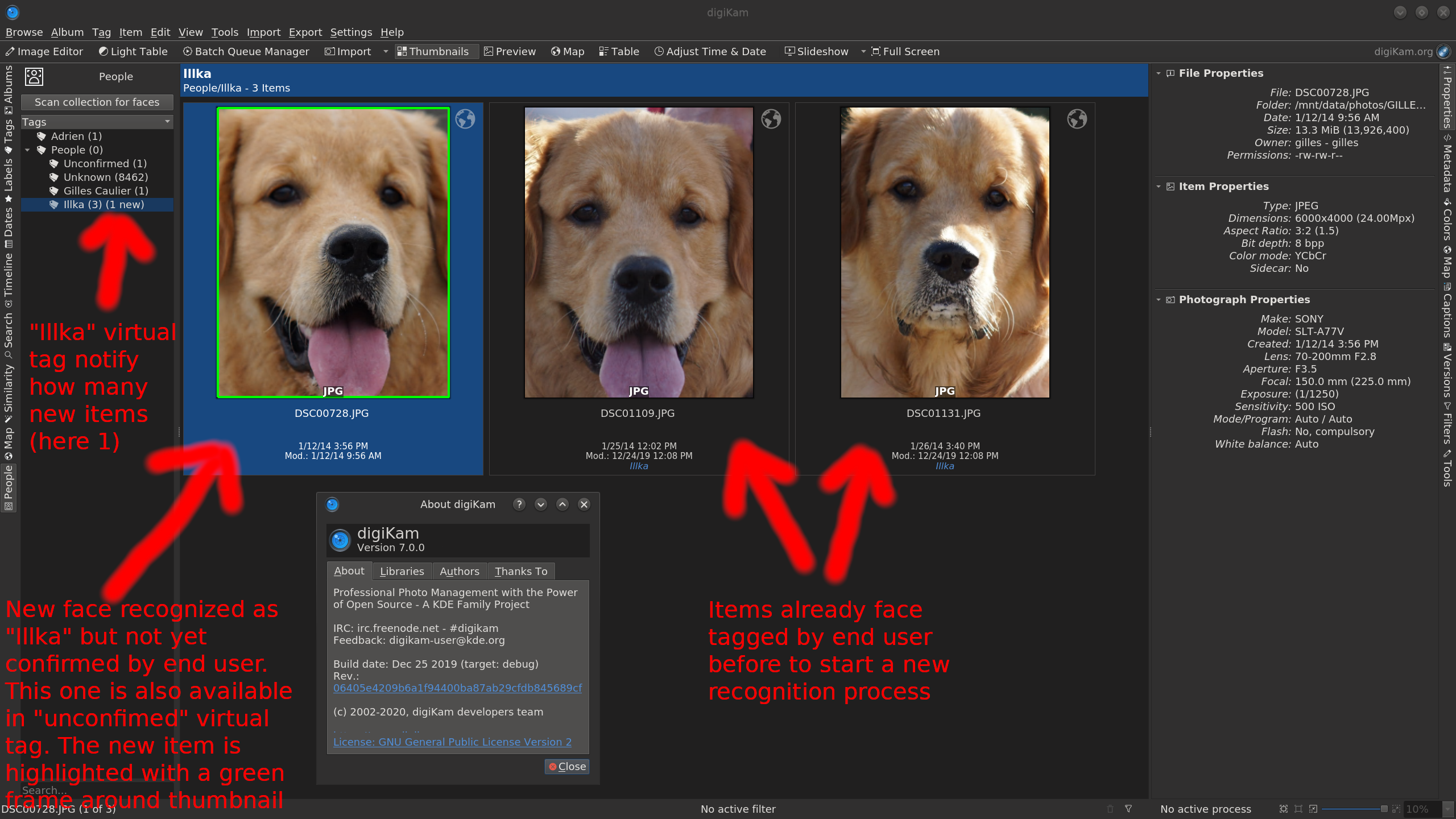 Recognition can start to work with just one face tagged, where at least 6 items were necessary to obtain results with the previous algorithms. But of course, if more than one face is already tagged, recognition is more likely to return good results. The true positive recognition rate with deep learning is really excellent and increases to 95%, where older algorithms were not able to reach 75% in the best of cases. Recognition also includes a Sensitivity/Specificity settings to tune the results’ accuracy, but we advise you leave the default settings as you begin experimenting with this feature with your own collection.

The performance is better than with previous versions, as the implementation supports multiple cores to speed up computations. We have also worked hard to fix serious and complex memory leaks in the face management pipeline. This hack took many months to complete, as the errors were very difficult to reproduce. You can read the long story from this bugzilla entry. Resolving this issue allowed us to close a long list of older reports related to Face Management.

To complete his project, Thanh Trung Dinh presented the new deep learning faces management at Akademy 2019 held in September in Milan. The talk was recorded and is available here.

Although Thanh’s project is complete, the whole story is not and the second stage of rewriting the Face Management workflow is an ongoing process with two new students working on it this summer.

Faces Management Improvement Projects In Progress While This Summer

The first project, managed by Kartik Ramesh, must completely fix all majors bugs in the graphical interface and improve usability to tag and manage faces. The following changes will be brought to the Face Management Workflow: 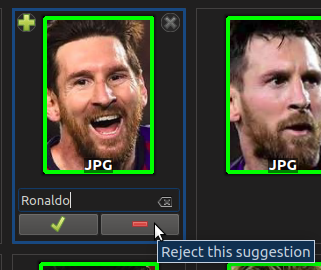 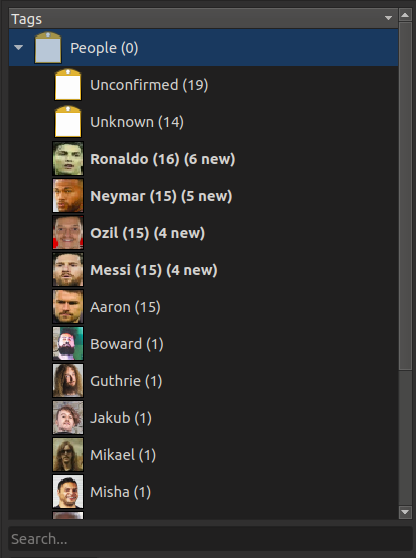 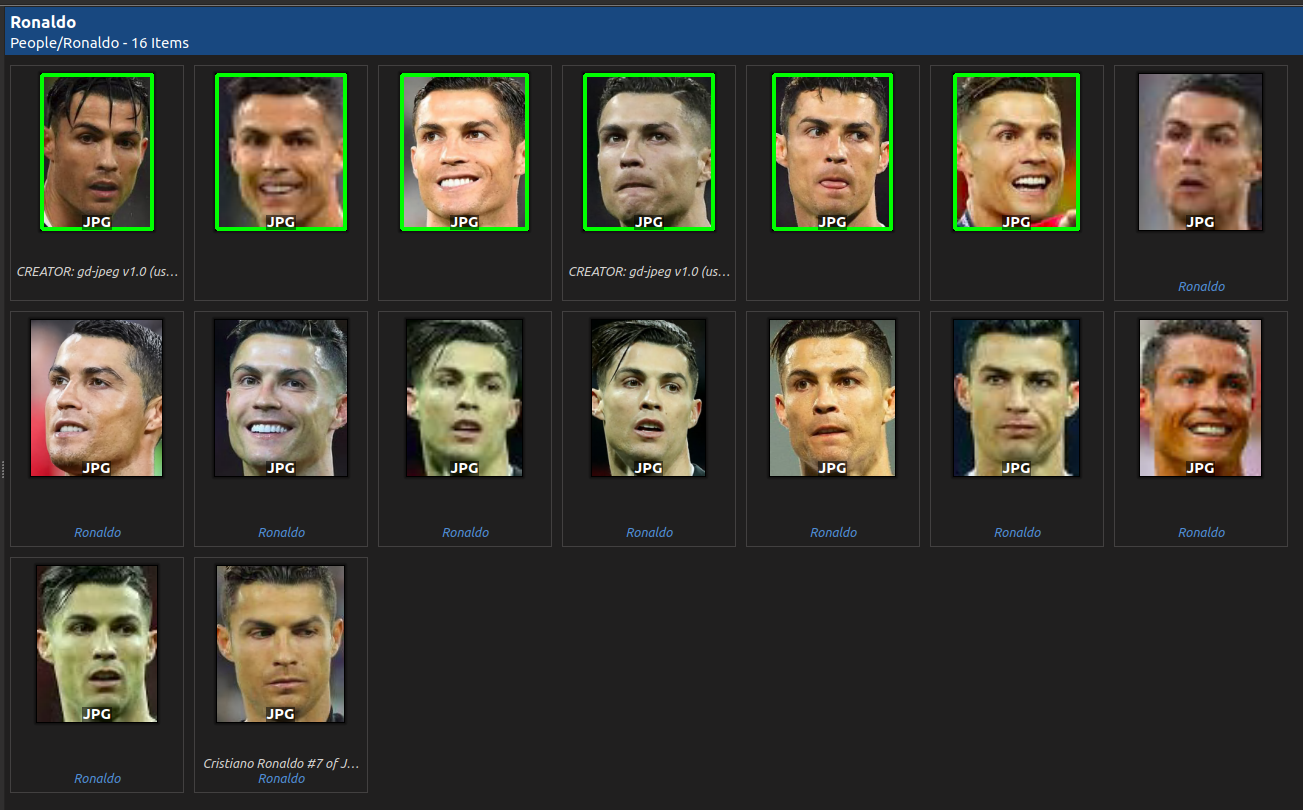 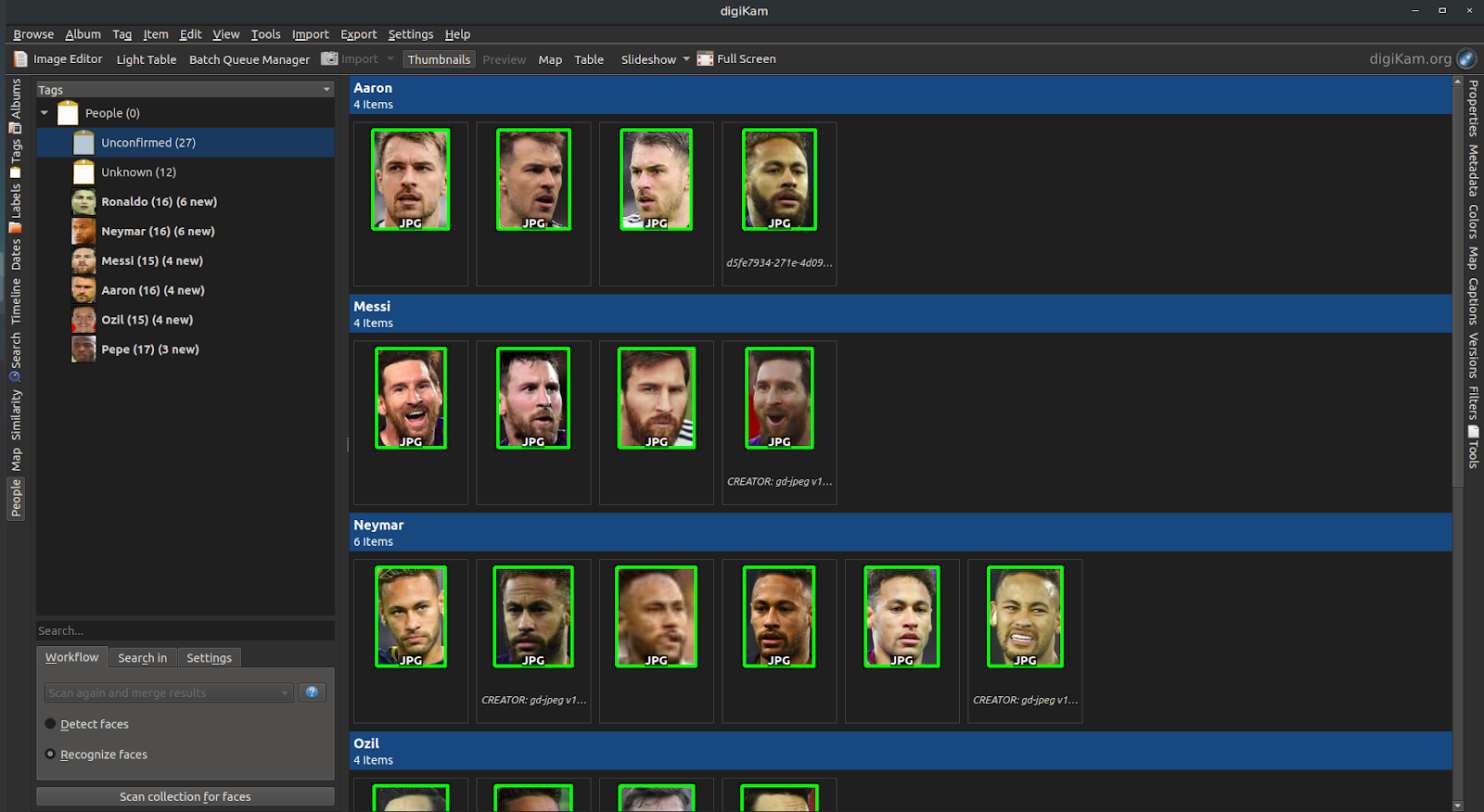 The second project, managed by Minh Nghia Duong, is to improve the neural network engine used by face recognition. The following changes will be brought to the Face Recognition Algorithm:

As you can see, work is advancing very well and we expect to publish new code later this summer, probably for digiKam 7.2.0 when all implementations will be tested and ready for production.

digiKam tries to support as many digital cameras’ file formats as possible. Support for RAW files is a big challenge. Some applications have been especially created only to support RAW files from specific cameras, as this kind of support is complex, long, and hard to maintain over time.

RAW files are not like JPEG images. Nothing is standardized, and camera makers are free to change everything inside these digital containers without ever documenting it. RAW files allow camera makers to re-invent the wheel and implement hidden features, to cache metadata, and to require a powerful computer to process the data.

When you buy an expensive camera, you would expect the image provided to be seriously pre-processed by the camera firmware and ready to use immediately. This is true for JPEG, but not RAW files. Even though JPEG is not perfect, it’s a well standardized format and also well documented. For Raw, for each new camera release, the format can change, as it depends on the camera’s sensor data that is not necessarily processed by the camera’s firmware. This requires an intensive reverse-engineering that the digiKam team cannot always support well. This is why we use the powerful Libraw library to post-process the RAW files on the computer. This library includes complex algorithms to support all kinds of different RAW file formats.

In version 7.0.0, we use the new version of libraw, 0.20, which introduces more than 40 new RAW formats, especially the most recent camera models available on the market. The list includes the new Canon CR3 format and the Sony A7R4 (61 Mpx!). See the list below for details:

This Libraw version is able to process in total more than 1100 RAW formats. You can find the complete list in digiKam and Showfoto through the Help/Supported RAW Camera dialog. We would like to thank the Libraw team for sharing and maintaining this wonderful library.

With the 6.4.0 release, we started supporting a new image format: HEIF. This container is used by Apple to store photos on iOS devices and also by Canon to store HDR images with the 1DX Mark III camera.

HEIF is a file format for individual images and image sequences. It was developed by the Moving Picture Experts Group (MPEG). The MPEG group claims that twice as much information can be stored in a HEIF image as in a JPEG image of the same size, resulting in a better quality image. HEIF also supports animation and is capable of storing more information than an animated GIF at a fraction of the size.

Compression in HEIF is delegated to an extra codec and currently x265 is supported. This codec gives excelent results when encoding images with small size without losing information. Metadata, preview, and color management are also supported.

HEIF can also support HDR if an extra codec is compiled with a pixel color depth higher than 8 bits. In this case, digiKam can store and edit an image without losing quality, since we have supported HDR for a while.

Another important point, besides being able to decode or encode HEIF image contents, is to populate the database with the main shot information captured from camera. The goal is to be able to use some technical criteria in search a engine later to find items in huge collections. With this new digiKam version, we fully support Exif, Iptc, and Xmp metadata extraction from HEIF, using the libheif shared library. HEIF Metadata changes are currently supported through XMP sidecar, as no write support is yet available.

The plan for the future is to support complex HEIF stuctures as image sequences and derivations. libheif has also introduced recently AVIF image format support, another photo container, so digiKam will also inherit this feature in the next releases.

With this new release we worked a lot on all implementations to support the new Qt framework versions. Qt 5.15 is now full supported and code will be mostly ready to compile fine with the next Qt 6 level planned at end of the year. 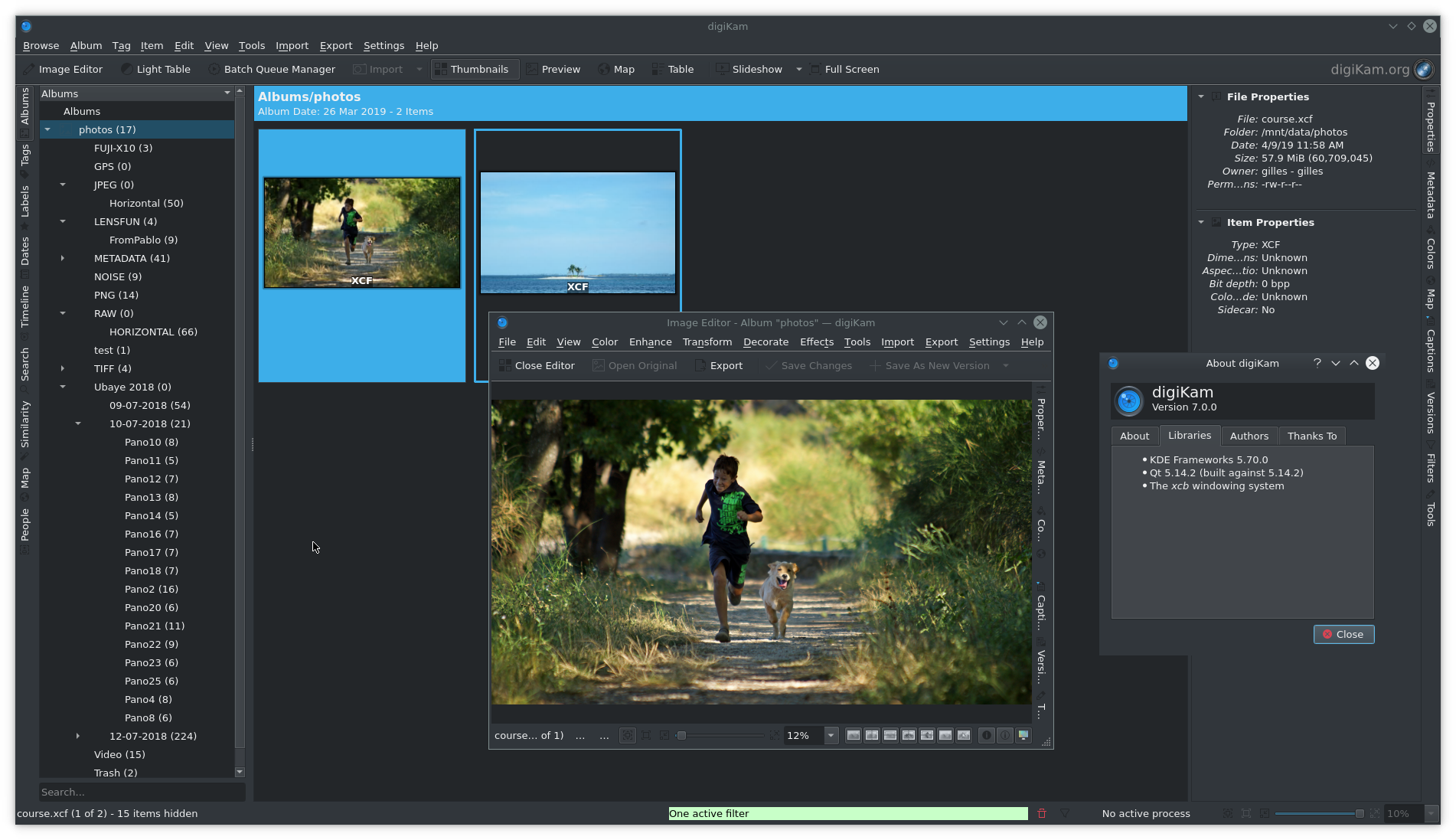 We now officialy support two FlatPak Linux bundles. One is built nightly from the latest git source by the KDE continuous integration workflow. This lets anyone quickly check the latest changes applied by developers. Another Flatpak is built from the official stable release and is available through the FlatHub hosting service.

You can install the digiKam Flatpak bundle using a Linux desktop installer such as Plasma’s Discover or Gnome Software manager. 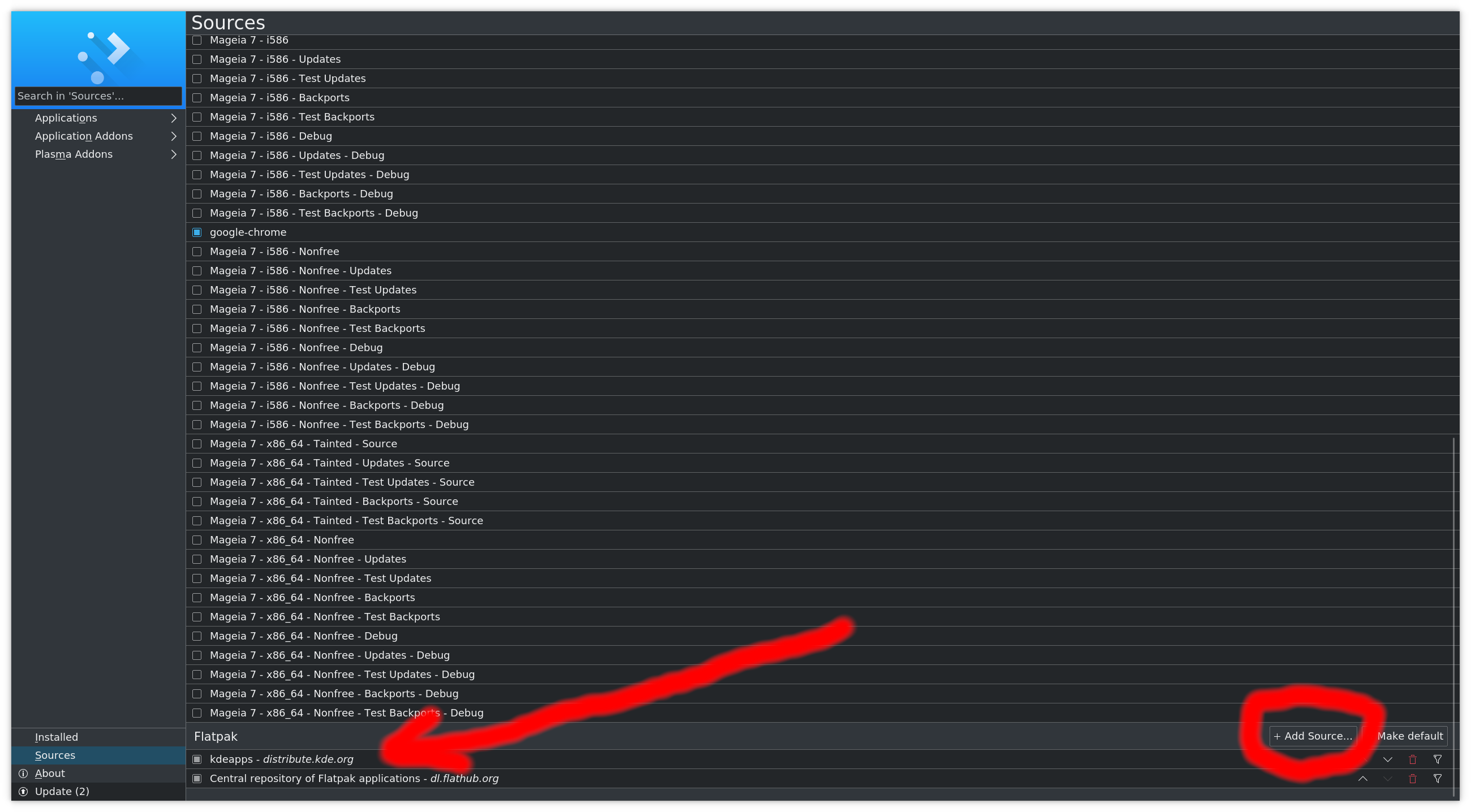 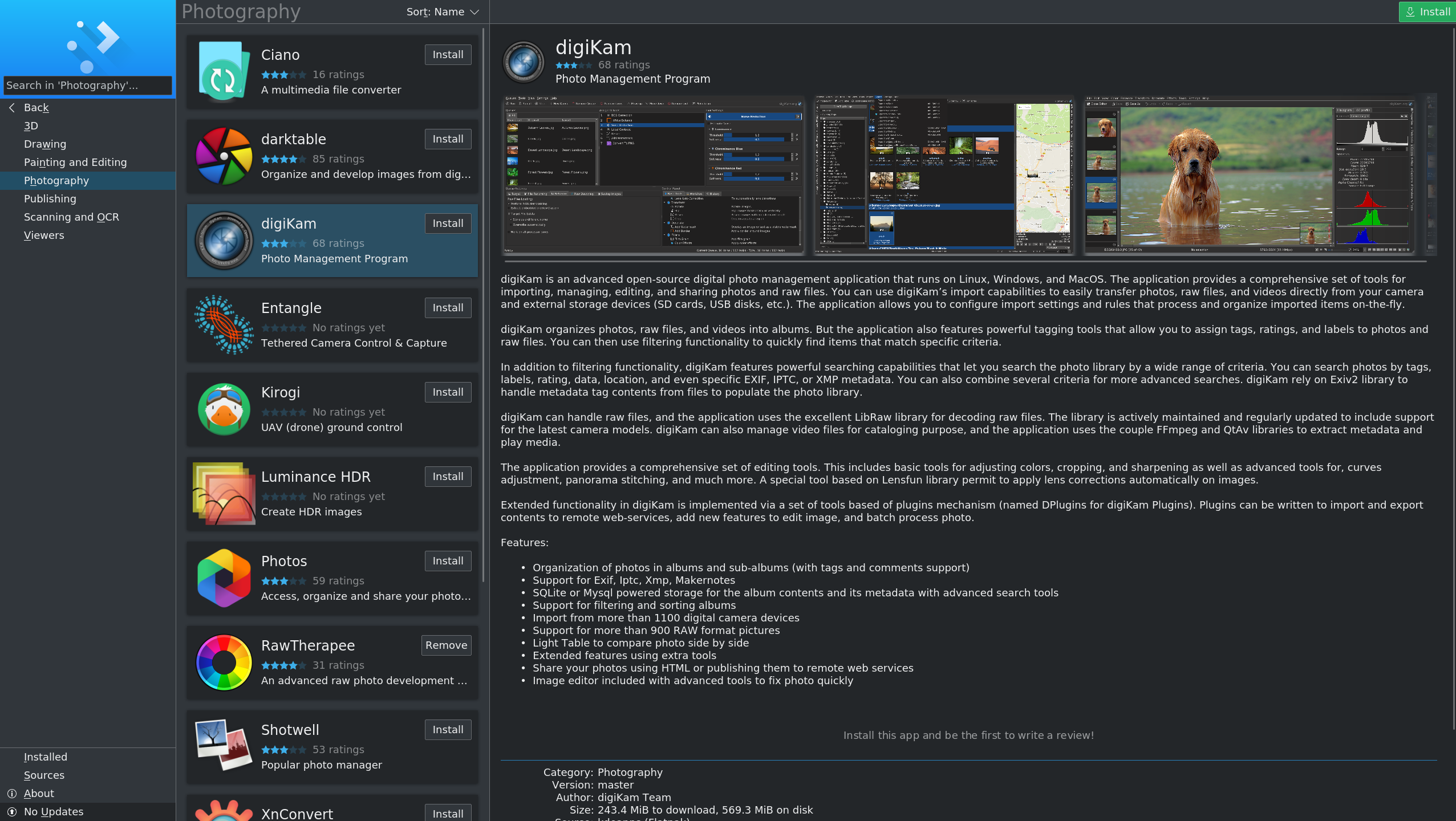 Finally, we added Microsoft Visual C++ support through a dedicated Continuous Integration workflow to compile all code with this compiler. The goal is to publish later an official release of digiKam in the Microsoft Windows Store.

An unsorted list of features and improvements included in this release: 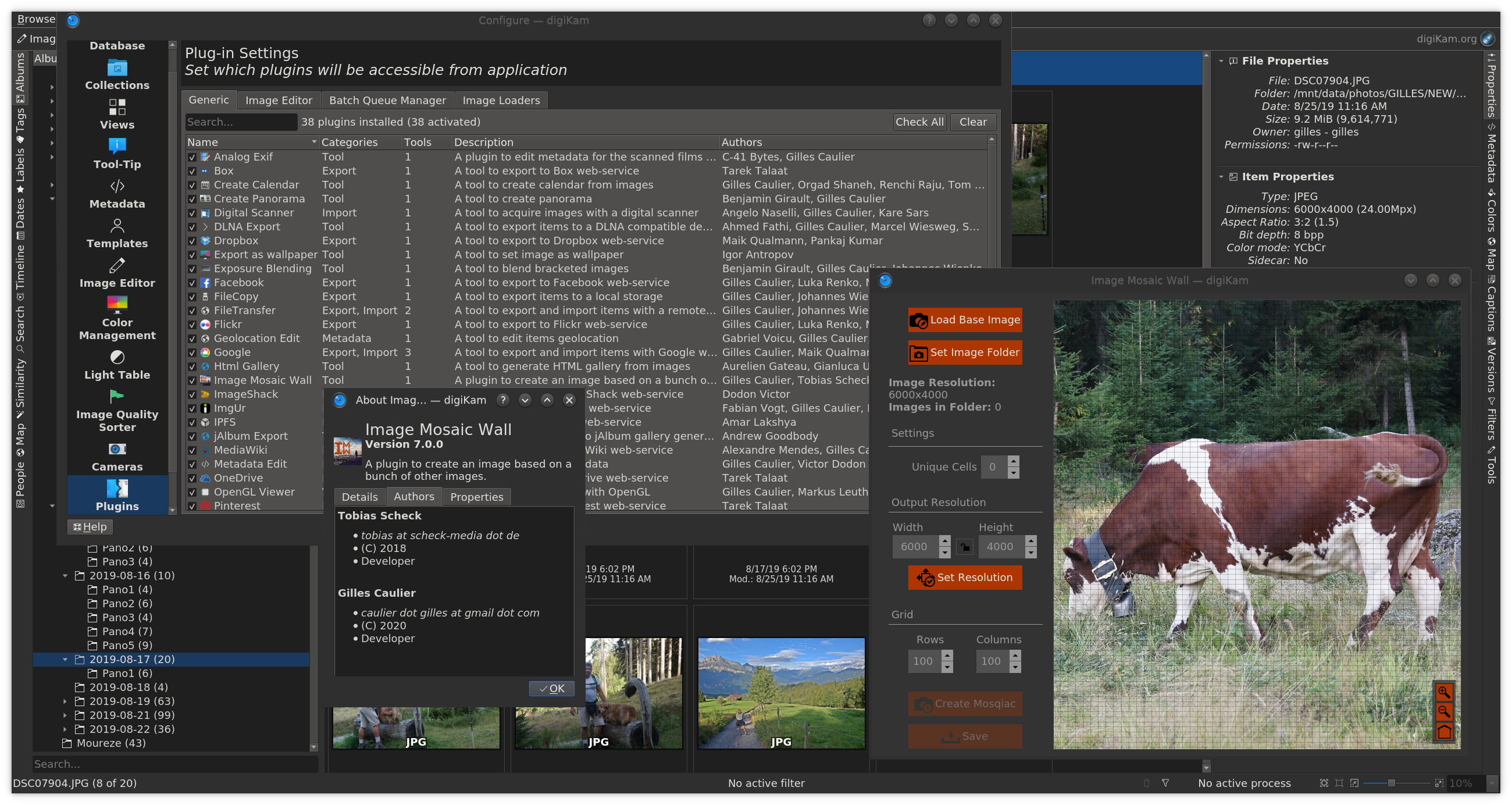 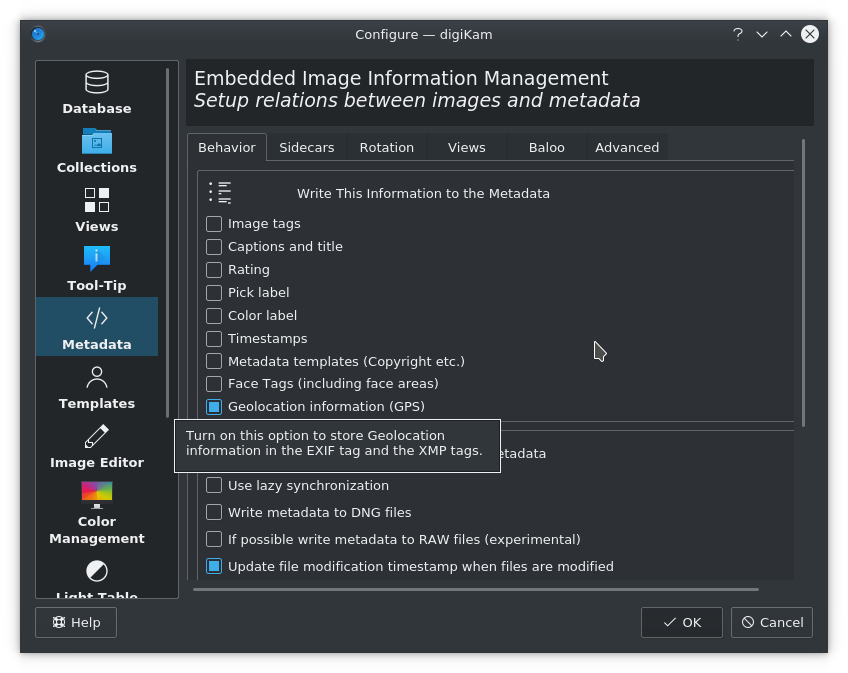 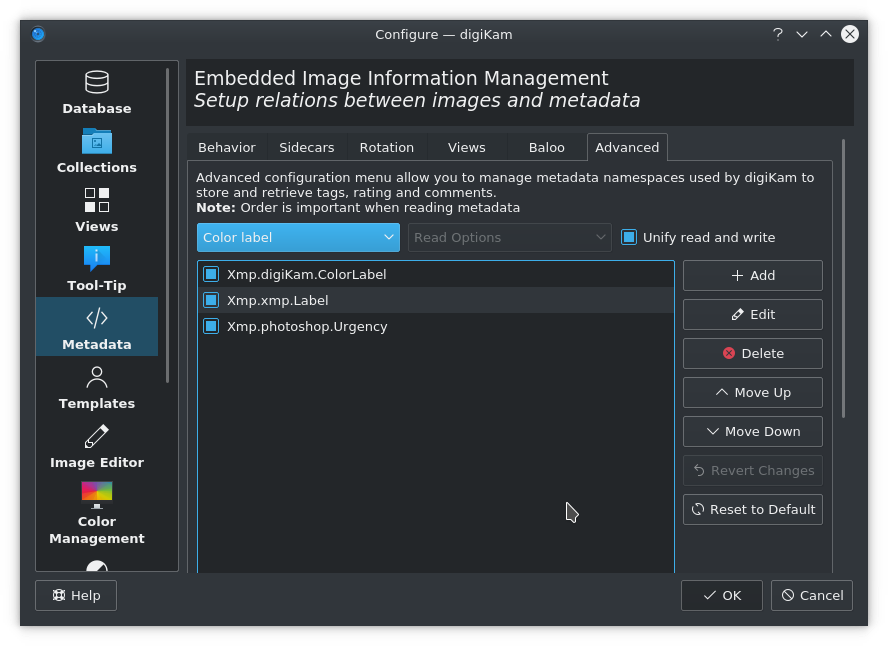 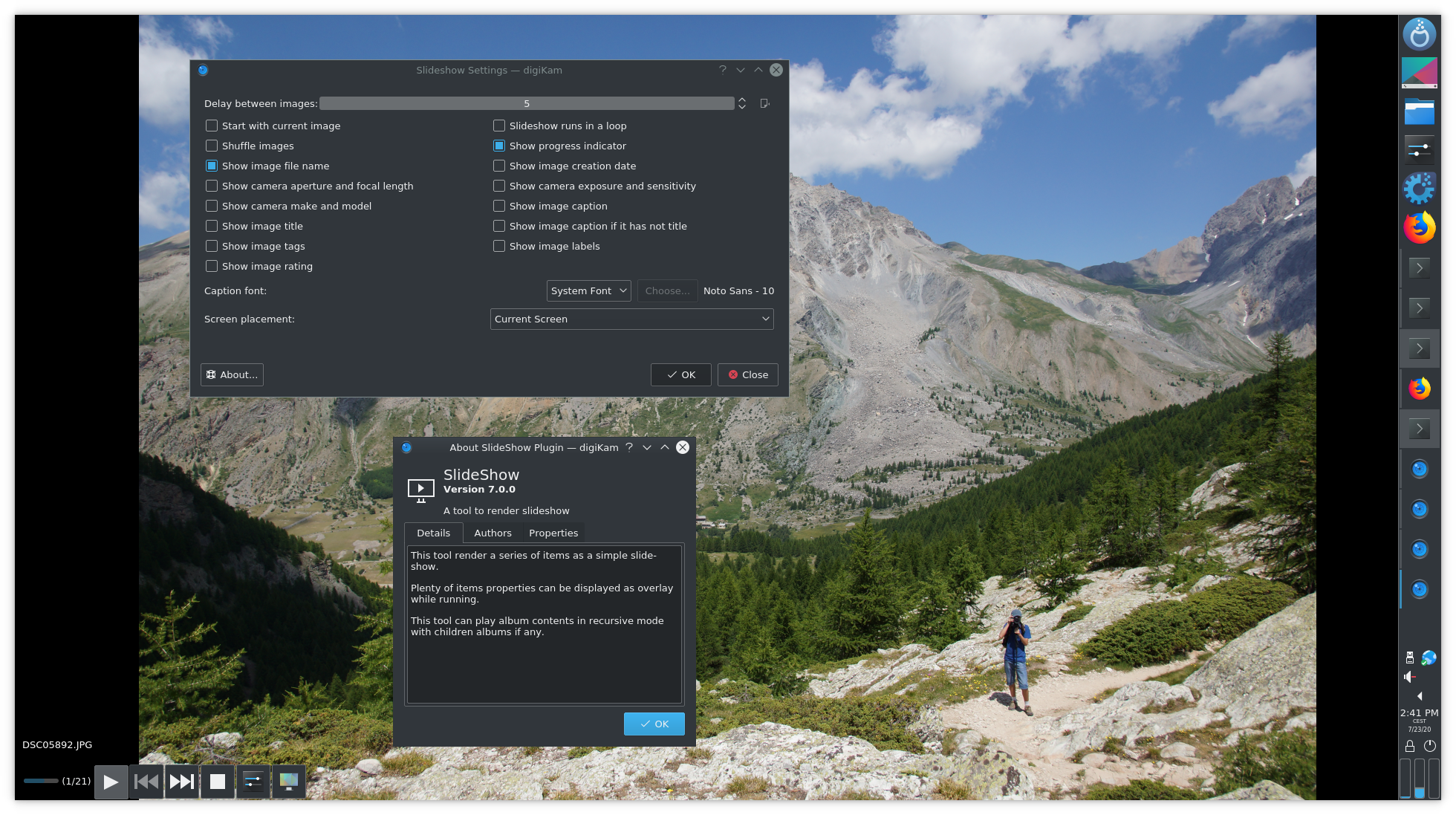 As you can see, digiKam version 7.0.0 has a lot going for it. The bugzilla entries closed alone for this release are impressive, with more than 750 files closed in one year of development. We have never reached this level before.

We would like to thank all users for your support and donations, and all contributors, students and testers who allowed us to improve and acheive this release.

We wish you a happy digiKaming this summer…